The Off Season Digest: What's Going On

It's been a few weeks since we posted anything, and my only explanation is that I haven't wanted to. I felt so crushed by Game 7 of the NLCS I really couldn't put anything thought down onto paper (or rather, webpage). Then last Friday Mike and I went to see Robyn Hitchcock and the Venus 3 at the Hiro Ballroom in Manhattan. The show ended so early (10:15!) that we had time to hang out and talk about life, child-rearing and eventually baseball. As we were talking, we discovered that Mike had very little idea about what was going on with the 2006 NL East Division champs. So here's an update about the past 30 days for all our readers--but especially for my just-getting-by-on-no-sleep co-blogger.

--Tom Glavine still doesn't know if he wants to come back to the Mets or go back to Atlanta.
Glavine wants to be home with his kids, which is perfectly good reason. But does he really think he'll get those 10 wins needed for 300 with the Braves quicker than he would with the Mets? Come on.

--The Mets new left fielder is Moises Alou.
If this was for the upcoming 1997 season I might be excited. But it's not. On the plus side, the guy willing to talk about pissing on his hands.

--Lasting Milledge might be on the trading block.
After all the negative whispers in the press, going somewhere else might be a good idea for Mr. High Five. But I would miss the Lastings Milledge Facts site.

--Heath Bell and Royce Ring were traded to the Padres.
Damn. I so was looking forward to more Ring my Bell jokes. Apparently this outfielder Ben Johnson the Mets received has some good potential. Hey, it worked with the X-Man.

--Jose Valentin and Orlando Hernandez were both re-signed and utilityman Damien Easly was signed.
In related news, stock for the makers of Ben Gay went up.

--Carlos Beltran, Jose Reyes and David Wright all made the Top 10 in the MVP voting.
One of these three will win at some point in their careers.

--3rd base coach Manny Acta took the job as the Nationals manager.
I bet he does well--but I hope he is unsuccessful 19 times next season.

--I got my Faith and Fear in Flushing shirt.
Jason from that blog swung by one of my gigs to drop it off. And the next day when I wore it at work two people figured out what the numbers meant in less that 15 seconds. I like working with Mets fans.

--The Mets bid 38-million for that Japanese pitcher, D-Mat.
And yet they lost to the Red Sox 51-million. 51-million? I wonder if the Mets bid had anything to do with my next item..

--The Mets new stadium will be called CitiField, bringing in 20-million a year for naming rights.
It could be a lot worse, it could be better. All I care is that the team is winning when the stadium opens.

--The Mets want to sign Barry Zito.
I don't know how I feel about this. I really don't. I know we need pitching, but Zito looked like crap against the Tigers...who got pounded by the Cards. Hmm.

I think that's about it for this season (there was some trade with the Marlins, but it seems kind of minor at this point). I predict Omar Minaya will make a couple of major moves between now and Christmas. And I hope they pay off next year.
Posted by Figgsrock2 at 12:46 PM 1 comment:

We Break Our Silence...For Drugs 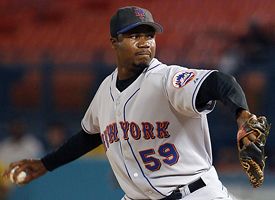 Hmm, I always wondered why Guillermo Mota suddenly was able to pitch after sucking for an entire season. And now we know.

Of course, he must have stopped taking whatever it was in the post-season. And perhaps Aaron Heilman won't be trade bait now.
Posted by Figgsrock2 at 4:49 PM No comments: