It's been a lengthy delay for this issue for various reasons, but our fall issue is finally in the mail! Subscribers should have a copy in their mailbox by the end of the week.
Posted by Figgsrock2 at 4:57 PM No comments: 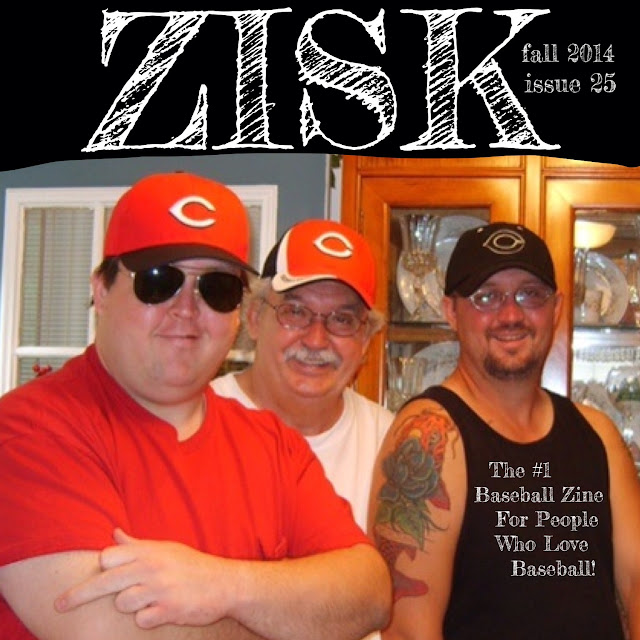 The Cincinnati Cycle by Shawn Abnoxious

On Wrigley's 100th, A Lesson in What Really Matters by R. Lincoln Harris

The Cincinnati Cycle by Shawn Abnoxious


It's July as I write this. George Vogel, a Cincinnati Standard reporter and sports anchor for local 12 News at Eleven announced that the Cincinnati Bengals training camp opens tomorrow. Yeah, I know, this is Zisk, a baseball magazine, but the training camp announcement couldn't have came at a worse time. The Cincinnati Reds are at a season low. Everybody—well, not everybody, but actually my Dad said Votto wasn't going to be the same after that knee-thingy and he was right.

It seems that despite a lot of players on the disabled list, things were looking up before the all-star game. I was actually warming up to the new manager Bryan Price, after the nasty surprise ousting of Dusty Baker. Then, in true Cincinnati professional sports fashion, everything fell apart.

You see, with the Bengals Training Camp starting-up, Cincinnatians have/will call it done with the Reds season and get 'all-about' football. That will last until the Bengals fuck-up and then talk of the Reds spring training begins and the vicious cycle begins again. The Bengals are ditched for hopes of the Reds next season. I call this The Cincinnati Cycle.

I know it’s harsh, but it's how this city’s run. We Cincinnatians are fair-weather evil bastards that are ready in a moment’s notice to throw whoever they have to under a bus or fucking street-car. We're fickle like that. We're not in it for the long-haul. Cincinnati fans are eager for championships! World Series and Super Bowl victories and all it's surrounding hoopla. We mean business.

On this fateful night of July 23, even before anyone said anything on the news, you could see it on the Reds’ faces already! It was over. Channel 12's George Vogel and his announcement of Bengals Training Camp just gave the jar a lid. In an after-game interview Bryan Price hinted at a possible turn-around after an off-day before a series at Great American Ballpark. A turn-around would be nice. That's a nice dream to have and hold onto. That's the sort of dream you build a wall around. Whereas there's still definitely room for a really tremendously awesome comeback, it's not going to happen. Trust me. Trust my
Dad.

I watched the highlights and those Brewers, those fucking Brewers, just won the physical victory as well as the mental victory. Price would dare not admit it but he knows. George Vogel knows. My Dad, watching from the foothills of the Appalachian Mountains, in the back bedroom of an add-on trailer, watching a 15" LED flatscreen knows. I know. Now you know! Someone's got to win, and someone's got to lose. That's where the Reds enter the equation.

I'm always going to be a Reds fan and will never forget my decision to start watching Cincinnati Reds games so my Dad and I would have something to talk about besides how well my car was running and when I was going to get the oil changed. I'm glad to have made that decision. I don't follow the Bengals the way I follow the Reds despite the mental similarities that both teams seem to have. I suppose, that really, truth be told, following theReds and to a verily lesser extent, the fucking Bengals, we, the collective we, we are Cincinnati! We are Greater Cincinnati and we have learned the valuable lesson of defeat, failure and more importantly moving-on.

All of these lessons are hard to face but are essential for living here and becoming proud, bitchy Cincinnatians. There's only going to be one champion and right off the bat, no one’s chances looks good. Everybody is a potential loser whether it's admitted or not. Welcome to Cincinnati, we've been waiting for you.

I realize now, after all these words, that I thought I was better than all of this. I thought I was a much bigger fan, a more loyal fan, than to just give up so soon after the allstar break. Long before there's talk of a “magic number” but truly, I'm not. I admit it! I'm a product of my environment and a slave to my ingrained Southwestern Ohio doom-culture. I'm from Cincinnati! I am Cincinnati! I'm gonna go call my Dad who will agree and solidify my newfound admissions with a phone conversation that will last less than a minute. My Dad on the phone, is all killer and no filler. He will verify that for the 2014 season, The Reds are DONE.


Who doesn't love a baseball Top Ten List? Here are a few of ours, all in alphabetical order, born of endless hours in the car, driving to every major league ballpark – twice.

Top Ten Wasted Talents
There's nothing sadder than thinking about what might have been. Here are some glorious ballplayers who, for one reason or another, tripped, stumbled, and fell on their putative way to Cooperstown
Billy Beane
Cesar Cedeno
J.D. Drew
Dwight Gooden
Jeff King
Ben McDonald
Dave Parker
Darryl Strawberry
Brien Taylor
Garry Templeton
Honorable Mention: Matt Bush

All of this, of course, is up for debate. Enjoy!

Abby Mendelson is a writer and educator in Pittsburgh whose books include histories of the Pittsburgh Steelers, Pittsburgh neighborhoods and houses of worship, among others.

Jesse Mendelson, his son, is a healthcare consultant in Washington, D.C., skilled baseball historian like his dad, and highly successful fantasy player.
Posted by Figgsrock2 at 9:30 PM No comments:

On Wrigley's 100th, A Lesson in What Really Matters by R. Lincoln Harris


As a society, we like round numbers. The 40th anniversary of Hank Aaron's 715th home run was duly celebrated this year, but don't look for anything similar to it until the 50th anniversary in 2024. The same thing goes for any significant events from 1974, 1984, 1989, 1994 (20th anniversary of the players' strike, anyone?) and 2004. Those events will be dusted off and remembered this year, and will then go back into mothballs to make room for next year's anniversaries.

But 100 years is a big deal. For starters, it virtually guarantees that nobody is alive with any memory of the event taking place to begin with. People might live to be 100, but their memories don't usually kick in until the age of five or six, and by the time they make it to 105 or 106, well, let's say nature will assert itself first.

But the second reason why 100 years is a big deal is that it won't be commemorated again until year 125 or maybe year 150. So enjoy the commemoration, certainly, but realize that anniversaries number 101 through 124, at least, will be summarily ignored.

With the 100-year anniversary of Wrigley Field—even if the Cubs didn't yet play there and the park had a different name—it was the second time in three years that a ballpark reached the century mark, as Fenway Park did so back in 2012. But another ballpark centennial won't happen until Dodger Stadium in 2062, which is nearly a half-century away. So chances are that we won't see another such celebration in our lifetimes, and this one had better count.

Day games in the middle of the week are a rare treat at Wrigley Field. Night games once happened in a very haphazard manner, but recently it has broken down into night games on Mondays, Tuesdays, Wednesdays, and Thursdays, and day games on Fridays, Saturdays, and Sundays. With that in mind, it's rare that I get to listen to a Cubs game on the radio as I'm driving home from work. But the centennial day was an exception—a day game on a Wednesday—and I felt very good as I left the office in the afternoon.

The Cubs had opened up a 5-2 lead over the Arizona Diamondbacks, who had reverted to calling themselves the "Packers" to honor the visiting team for the 1914 opener at Weeghman Park in Chicago. The game was played in the new Federal League, and Chicago's entry was known as the Chi-Feds. The Cubs sported throwback uniforms with "Feds" on them, to get more into the 1914 groove. So from this moment on, the action will be between the Feds (Cubs) and Packers (D-Backs).

When I got into my car to begin the commute home, the Feds still held a 5-4 lead, but their closer, Pedro Strop, was struggling. What I did not know was that their setup man—a concept that would have been utterly nonsensical to the actual Chi-Feds—had pitched a supremely efficient eighth inning, needing only six pitches to retire the side. After taking over for Feds starter Jeff Samardzija. But this is still the Tony LaRussa era of bullpen management, which means that the designated closer gets to start the ninth inning with a fresh slate.

A leadoff walk is usually a bad sign, and the Feds got one in the ninth inning. Throw in a fielding error and another walk, and the home team found itself in a spot that it could not escape from. The Feds' closer did not get a called strike on a two-strike pitch, and the Packers were able to tie the game up with a single, and then push the eventual winning runs across on what the announcer described (and I'm not kidding) as a "pop-fly triple" to right field. Only the Feds could lose in such stunning fashion.

By the time the home team had lost, my mind was numb. On a day loaded with historical significance, the second century of the old ballpark had been launched in the most horrific way imaginable. I picked up my phone, and was intending to post a Facebook message saying "Painful. There's no other word for it." I had the message in mind, and it was only a matter of a few keystrokes to share my grief with others of a similar disposition.

But what I saw upon opening my Facebook account stopped me cold. A student of mine, from the days when I taught Social Studies in the Chicago Public Schools in the late 1990s, had died suddenly. He was in his early 30s, and I had not seen or heard from him since he walked across the stage at graduation back in the summer of 2000. But still, I have friended a number of his former classmates in the years since then, and the news of his passing was so much of a shock that the result of a baseball game seemed terribly unimportant.

Instead of typing out my disappointment with the Feds, I offered words of encouragement to his family and friends on Facebook, and vowed to hug my own family even tighter than usual when I saw them that evening. To do anything else would have felt disrespectful.

The truth is that it's only a game, folks. It's not actually life and death, what happens out there on a baseball field. The unfortunate thing is that it took an actual incidence of life and death to make this clear to me. And it's a lesson that I'll hopefully carry with me for the rest of my days.