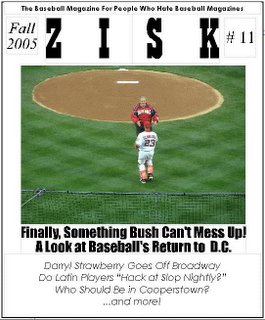 My friend Mike was telling me about a movie he’d recently seen, a 3-D IMAX movie about the moon.

“It was meant for someone who’s never heard of the moon before—there was nothing new. And it turns out there’s not much to see on the moon, a whole lot of dull mixed with a bit of uninteresting.”

That’s a perfect description for the 2005 NL pennant race, a mundane landscape of runaway division winners. Personally, I’m pulling for the Padres to win the NL West and make the post-season with a sub-.500 record; we’ll have plenty to talk about when a losing team wins the World Series—Mets fans in particular given that the Mets are likely to finish last in their division yet still have a better record than the playoff-bound Padres.

Speaking of the Mets, check out the Zisk website for a day-by-day account of the Metropolitans 2005 season. We’ve had a great time covering the Mets every day, but plan to expand the site’s focus during the off-season and into next year. Steve has gone grey trying to come up with different ways to say, “Looper blows another save” and “Beltran left four more runners on base last night” or “Why on earth is Willie sticking with Ishii and Zambrano?!? Please god, tell me why.”

Meanwhile, all the action right now is in the AL, which is bubbling like the surface of a volcano. There are three races coming down to the last week; Los Angeles taking advantage of Oakland’s many injuries; Chicago and Boston trying to avoid collapses that will have their faithful agonizing all winter. The AL can even boast of having baseball’s biggest schmuck, with Rafael Palmeiro passing Barry Bonds.

Here’s to an exciting playoff season. Let anyone but the Yankees win! (Hey, this issue is otherwise devoid of Yankee bashing, we’re allowed a token dig.)

Hacking at Slop by Ken Derr

The Quick And the Brain Dead by John Shiffert

The Loser in Right Field by Steve Reynolds

Darryl, Off Broadway by Mike Faloon

Who Belongs in Cooperstown by Jeff Herz

Baseball Returns to Our Nation's Capitol by Nancy Golden

My Dad, The Captain of the Cincinnati Reds by Shawn Abnoxious

Prescription For a Post-Season Media Diet by Heath Row

Bat Boy For a Day by Mike Faloon

Who's the Best Since Free Agency Began? by Jeff Herz

The Art of War: Or, How I learned to Stop Worrying About Placido Polanco's Head and Love Baseball by Michael Baker

A Memory by Lisa Alcock