This Makes My Stomach Hurt, Part 2 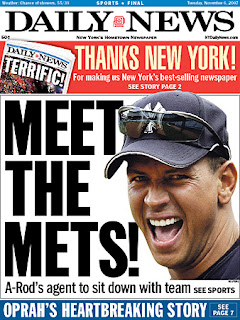 No, please, no. Let this story and this story be wrong. And let this one be right.

Honestly, if the Mets signed A-Rod, I'd have a hard time rooting for them in 2008. It sounds crazy to not want stats like that (50 home runs Steve!!! 150RBI!!!!!) but I'd rather avoid the publicity and the inevitable clubhouse cancer and post-season curse that's going to come with his contract. And how could they think of moving David Wright from third? He just won his first Gold Glove. (And congrats to Carlos Beltran for his second in a row as a Met.)

Ugh. I am not looking forward to this off season. I guess I will have WFAN off a lot more than usual the next nine weeks.
Posted by Figgsrock2 at 6:39 PM