The Best Day of NY Sports Ever?

I said to my friend Lee late Friday night, "Imagine if the Yankees lost and then the Mets swept? It could be the best New York sports day ever for me!"

And then it happened. 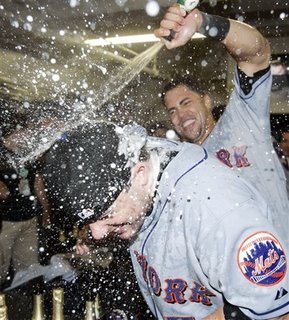 I could barely get to sleep Saturday night I was so excited. In fact, I woke up at 4:00 a.m., heard the Joe Torre rumors on WFAN, and then listened to all Yankee fans complain over and over again. They were using words such as "ashamed" and "embarrassed" followed up with "to be a Yankee fan." And all I could think was, I've never been embarrassed to be a Mets fan. Disgutsed? Sure. Annoyed? Yup. In physical pain? Oh yeah. But never embarrassed or ashamed. Being a Mets fan, you get used to a team choking (in Atlanta usually) and overall failure. I guess Yankee fans forgot the choke jobs of the past two years, or just wanted to forget.

Of course, the Yankees plight will cover the sports pages until Wednesday when the NLCS gets underway at Shea. Hopefully then the Mets will then get their due. Many sports folks "in the know" had written off the comeback kids from Flushing after the Pedro and El Duque injuries. But after seeing the passion this team displayed throughout this sweep, I have no doubt that they'll be going all the way...unless they only get three innings apiece from Maine, Trachsel and (shudder) Perez and the bullpen gets wore down. Then the offense may need to score 10 runs per game to win.

Lastly, one more comment about Yankee fans in this city of ours. It seems like there are three camps of fans in the wake of this losses. One camp feels that the World Series is their birthright, conveniently forgetting the Mattingly years (yes, the Mattingly curse is still in effect), and shows nothing but disgust for the Mets. (Yankee kiss-ass Mike Fatsesca is definitely in this camp. Sunday morning on what was supposed to be his NFL only show he just took call about the Yankees loss, and one point interrupting the 20/20 update when they played a clip of Gary Cohen calling Paul Lo Duca's go ahead hit. He interjected after the clip, saying, "Was that a home run? Geez, could he calm down a little?" What a prick that guy is.)

The second camp is heartbroken, but remembers how bad things were, and could care less about the Mets. The third (and very small camp) are the Yankee fans who remember the bad days and are people who who want New York teams to do well. These are people I can stand-- people like my friends Alli and Leya, who are heartbroken, but have wished the Mets well and hope they make it to the series. I must admit, I would not be that generous if the situation was reversed.