I Wish I Got This Nervous Before I Went to Work 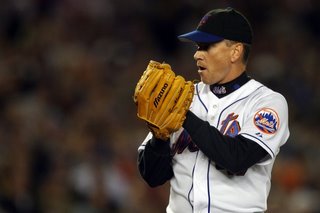 "Tonight was probably the most relaxed I've been all year long. I don't know why. I was pretty nervous and anxious driving in today with [Billy Wagner.]" --Tom "I'm Also Terrific" Glavine

This morning my co-worker Doug summed it up best out of all the analysis I heard and read about last night's sterling performance: "At times I thought I was watching Glavine and Lo Duca play catch." Even though I was in left field directly under the scoreboard (more on my good luck later) I could tell that Glavine was on very earlier tonight. The way the Dodgers hitters flailed around reminded me of all the times Glavine pissed me off when he was pitching with the Braves. And after reading how poorly Glavine pitched during his last playoff series in 2002 (0-2 with a 15.26 ERA, gulp), I could understand why he was so candid in the postgame interview of WFAN about how nervous he was when he woke up yesterday morning.

What was also very satisfying about the win last night was the Mets not relying on a home run to get runs across (even though David Wright and Cliff Floyd came close). Singles, sac bunts, sac flies and heady baserunning drove the offense tonight. Some AL fans might like a more "bash 'em up" kind of game, but I'll take a well pitched game like this one any day.

Now for my good luck in getting into Shea. If you're a regular reader of this blog, you'll know that my friend Jocelyn has gotten me into some cool places at Shea through her connection at WFAN. She rang me up 90 minutes before the game was about to start and said she had an extra ticket, and they might be on the field level. I must admit , I said no at first because I was SO exhausted from the gig the night before, but then I realized I should, nay, needed to rally and get my ass on a train to Flushing. So I went, we got the tix from a great guy at MLB and sat in these amazing seats under the left field scoreboard. The season ticket holders next to us were very friendly and nice people and were the kind of folks I could see becoming good friends with over 82 games. And we were close enough to the "dream seats" to look at the TV's built into them to check out close replays.

Alas, there always have to be some morons at a playoff game. As soon as we sat down, I could tell these two drunken idiots two rows in front of us were going to be trouble. They yelled unnecessary vulgar insults at a random Dodger fans in our section and kept spilling beer in the aisle when they went EVERY HALF-INNING to get more. Then things got weird, when one guy took his two shirts (and BATTING GLOVES?) off in the 7th, waving one shirt around...and then started slapping his buddy's ass.

And then he did it over and over again.

One of the season ticket holders sitting next to me got her camera out and said to me, "I can't wait to catch them making out." Oh I laughed.

I can't wait for tomorrow night. A sweep would be, well, sweet.
Posted by Figgsrock2 at 11:43 AM