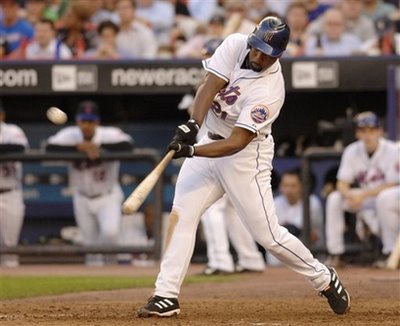 Yes, that's right, Carlos Delgado played in 1,711 regular season games waiting for a shot in the post-season. Mets fans probably expected one Carlos to get hot in the playoff--it's just that they chose the wrong one. In a season of watching Delgado, I've never seen the man looked so pumped to be on a baseball field. His shot--no, pardon me, I need to use caps here to appropriately describe it--SHOT to center field was the longest home run I have ever seen in a playoff game. When they start laying the foundation for the new Shea (or as I like to call it, Gil Hodges Stadium), I do believe they will find that ball buried 10 feet into the ground where third base is supposed to go. Move over Captain Intangible--Delgado is here to push you off the back pages.

Alas, I missed Guillermo Mota hitting with the bases loaded as Mike mentioned, as I was already at the private party gig we had in Chelsea. I had to stop listening when it was 4-4, so my friend Erik text messaged whenever the score changed. I was never so happy to step up to the mic as when I announced to the folks slinging back the free drinks that the Mets had won 6-5. I've tried to keep my October schedule clear with the playoffs in mind (I've turned down tickets to five concerts in October so far), but when someone wants to book the band for private gigs, it's good to take them because usually one private party can lead to another private gig, and so on and so on. Fortunately our regular Thursday Brooklyn gig is at a Mets bar and features a huge projection screen. (And Mets beer too!)

Okay, back to a few random thoughts about the game:
--John Maine did a great job, but that look on his face after he was taken out said it all. "I could have gotten those two guys out. Pleeeeaaase give me a chance."

--David Wright obviously knows how to raise his game as well.

--Cliff Floyd might be the poster child for cortisone by the end of the playoffs.

--Guillermo Mota obviously should only pitch one inning per game. That one inning is usually damn good, and that's all we should need.

--I did get to hear most of Gary Cohen back on the radio, and the guy hasn't missed a step from being on TV. His one-inning reunion with Howie Rose gave me that same feeling of excitement and comfort that Bruce Springsteen and the E Street Band did the first time I saw them on their 1999 reunion tour. I hope they go all the way to World series just so I can hear more of them together.

--Lastly, for the best article about the play everyone is talking about, check out this gem from Jason Stark.

Get us six good innings tonight Tom. And let's not have a repeat of September 8th with this guy on the mound.
Posted by Figgsrock2 at 11:58 AM