Keith Hernandez and I had something in common over the weekend--we both napped during a Mets game. During Sunday's game Keith mentioned the great job SNY director Bill Webb did working on the FOX telecast of Saturday's Mets-Braves contest. Then Gary Cohen, who seems always be looking for a way to egg Keith on, chimed in:

Gary: Did that keep you interested the whole time?
Keith: No, I feel asleep.
Ron Darling: Hey, those 4 p.m. starts are prime nap time.

Right after that comment, I fell asleep. I woke up at 9 a.m. (with only 4 hours of sleep under my belt) with a painful muscle spasm in my calf, so getting some nap time seemed more important than the rubber game of the series. (And I missed the second loss to Braves this year, so I felt better about my nap when I woke up at 4 p.m.) I did write down one more great comment from Keith about the shift the Braves employed while Carlos Delgado was up.

Keith: That hole there, you could drive a whole panzer division through there.
Gary: Um, how many tanks is that?
Keith: Um, a lot?

(FYI, a typical panzer division had about 250 tanks in it.)

I won't be able to listen to today's game because of the daytime start, but at least Keith's visuals kept me entertained. When throwing out the first pitch to Howard Johnson, Keith had his number-17 jersey tucked into his suit pants. Who does that?
UPDATE: I mean, look at this...what was Keith thinking: 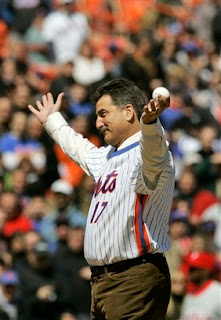