The Wright And Wrong Report: Broken Legs and Ripoffs

As I previewed on Friday, my friend Nancy took the bus up from D.C. to go to our annual Mets-Nationals game. (Can I call something that has happened only two years so far annual? I hope so.) Last year I watched the Mets lose at RFK, so this year it was Nancy's turn to watch her Nationals lose what was a bizarre game. John Maine had a no hitter for the first three innings, which meant would couldn't leave to go get our picture taken with the 1986 World Series trophy because, well, I'm superstitious like that. Once the no-hitter was done, we met Nancy's friend Paula and her dad Bob and went to find the trophy. In that time, the Maine's control seemed to leave the ballpark with what seemed to be 18 bases-loaded walks.

We found the trophy in the right field field level food court, got our picture taken and then tried to figure out how much it was going to cost to get it printed (more on that later). As we decided to watch an inning behind the disabled viewing area, Nancy casually mentioned that she had touched the trophy even though they specifically said not to do so. In that instant in the bottom of the 5th, the Mets bats came to life. Shawn Green celebrated the New Year with a double, and the team rolled from there. We had made it back to our seats in time to see the horrific collision between the Nats' Nick Johnson and Austin Kearns. At the time we had no idea if he was paralyzed or what, so it's safe to say that both of us had a queasy feeling in our stomachs. (A broken femur is very bad, but at least Johnson's career isn't over.)

After a night of rock and booze throughout Manhattan and Brooklyn, I came into the office today to do a couple of work-related things. I took the time to find our photo with the trophy--and then just about spit out my water when I found out the cheapest price to get the photo was the Mets Holiday card for $6.99. What a ripoff! A regular 5" by 7" print is 12 bucks. Damn, I got angry. So I did a bit of hacking: 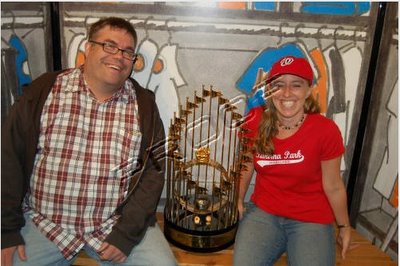