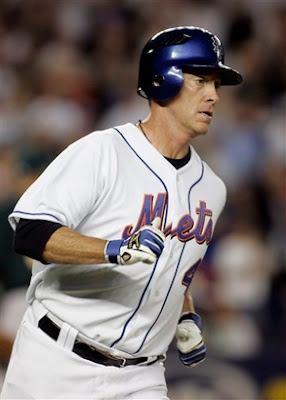 As my poetic colleague Mike noted below, Tom Glavine's run to that hit gladiator movie finally moved up a notch. I swear that at points Glavine had a look on his face that said, "Screw this, I am going to win this entire game myself." And I loved his post-game comments on SNY--"I was embarrassed by those last two starts."
Of course, this will all be for naught if they can't win one of the next two. A series win would be helpful for the team's (and the fansbase's) confidence.
Still no Keith Hernandez (I assume he'll be back for the St. Louis series), but Ron Darling had a total Keith-like moment when Marco Scutaro was inserted as a pinch hitter:
Gary: Scutaro is a former met, having been a bench player in 2002 and 2003.
(20 seconds go by)
Ron: Hey, didn't Scutaro used be a Met?
I almost spit out my iced tea after that one.
El Duque, we need something good tonight...
Posted by Figgsrock2 at 2:31 PM