Sox in the City: A Zisk Book Review by Jake Austen 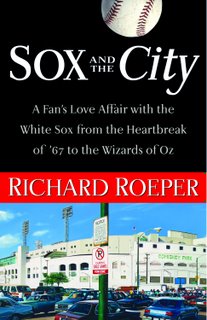 I was at a White Sox game where the team’s furry mascot was suspended for making an obscene gesture with a baseball bat. I was there when the Sox first baseman had a surprise pre-game epileptic seizure. I was in attendance when a trained frisbee-catching dog pooped in centerfield between games of a doubleheader. I was at a Sox blowout where a player made a meaningless throw to the plate so that the fans (who were chanting “Pizza, Pizza, Pizza…”) could win the Pizza Hut personal pan pizzas that were free with ticket stubs from shutouts.

I’m including my Sox Fan resume here because that’s the way Richard Roeper opens his new book, Sox and the City (Chicago Review Press). I can’t pretend to be the superfan Roeper is (he boasts of attending 1,000 games, I’ve only been to about 400), but I did feel that I was hardcore enough that probably nothing he had to say about Sox devotion would be a revelation to me. I was wrong. The book, ostensibly a nostalgic look back at the writer’s forty years as a Sox rooter, framed by his accounts of the homestretch of the Sox’ 2005 World Series championship season, elicited some unexpected feelings in my southside heart.

What I never realized before reading this book was that I was born a decade too late to catch the Sox years that I would have dug most. Basically, Roeper lived an ideal Sox fan life. In utero during the White Sox disappointing 1959 World Series loss, Roeper was born into a household of southside Sox fanatics and spent the 60s rooting for interesting, sometimes competitive teams. As he was hitting puberty the Sox fielded his all time favorite squad, the 1972 team that was anchored by the outrageous, ultra-talented slugger Dick Allen.

I grew up with the legend of Allen well ingrained in my consciousness (“Who was the first black manager in baseball,” a co-worker once joked, “Dick Allen—he ran the White Sox for three years!”), but as a toddler I have no genuine memory of the 1972 season. More importantly, when I began to attend games in the mid-70s the park was filled with teenagers and longhaired kids in their early twenties. The back rows of the upper deck were thick with mysterious sweet smelling smoke and the place felt more like a rock concert or a bar than a ballpark. Roeper was a teen during those years—he was at Disco Demolition, he was sneaking in gallon jugs of beer, and he genuinely understood the bizarre ways that in Chicago rock & roll and sports are allowed to intersect. The 70s, with revered peg-legged Bill Veeck at the helm and Zisks, Fisks and 3 foot afro-wearing Chet Lemons on the field, were a golden age of Soxdom, and being a teen during those years was paradise, as this book ably relates.

Sox In the City may be the best White Sox book that doesn’t prominently feature Shoeless Joe Jackson as a protagonist. That is not saying much, however, as unlike storied franchises like the Yankees and Red Sox, the Pale Hose have inspired only a handful of books. Roeper is a better writer than most die-hards, and he’s certainly better than most ex-athletes (reading a near-illiterate autobiography by my favorite player Ron Kittle was a devastating experience). Though the book is aimed towards Sox fans, the earnest devotion and love he has for his team would probably ring true with any sports fan. I can attest that Roeper’s detailed descriptions of games he attended in the sixties drew me in even though I knew nothing about his obscure favorite players. The book includes the obligatory, but heartfelt, tales of father and son bonding over baseball. It is chockfull of sidebars and special sections containing trivia and nuttiness (including a detailed description of the all time best highlight film clip—the time Carlton Fisk brutally tagged out two Yankees at home plate simultaneously). It also deliciously features plenty of excerpts from “longtime Sox watcher” Jay Marrioti’s doomsaying 2005 columns where he continuously declared the Sox dead to rights. Sometimes the author is a little too proud of his cleverness (he coins the phrase “bi-soxual” for fans who claim to like both the Cubs and Sox) but for the most part this is a solid read.

Roeper is an interesting figure because he’s primarily defined by who he isn’t. As a regular-guy Chicago newspaper columnist, comparisons to Mike Royko are inevitable, but to Roeper’s credit he is the least blatant Royko impersonator of the bunch. For one, he isn’t a rabble rouser (he goes easy on the Daley clan). More significantly, unlike Royko-esque, hard drinking, hard-living newspapermen of yore, Roeper is unashamed to be a bit of a nerd. When Allen, his favorite player, appeared on the cover of Sports Illustrated smoking a cigarette and juggling, clean-cut adolescent Roeper continued to shun tobacco—but took up juggling!

Roeper’s national profile is defined by him not being Gene Siskel, the late film critic he replaced on the syndicated movie review TV show that is now called Ebert & Roeper. Roeper is certainly a better writer than Siskel (Siskel was never even the best film critic at the Tribune), and he’s far more pleasant, clever, and personable. However, much of Siskel’s appeal was the course, bitter manner in which he would disagree with his hefty co-host. The arrogant, dour-faced Siskel was exciting to watch because he was not slick, which made the tension between the two critics seem real, like a deeply troubled marriage. Thus, despite being a better wordsmith and a more professional broadcaster, Roeper will always be branded Not-Siskel.

But Roeper’s Sox fanaticism is a realm where he can be his own man. Sure Siskel engaged in predictable Jordan-era Bulls boosterism, but that’s incomparable with being a devotee of Sox “greats” Cisco Carlos or Bobby Knoop. However, Roeper does lose me a little with his inability to separate his trade as a Hollywood hype man with the unglamorous world of 35th and Shields. Roeper obviously loves showbiz gossip, celebrity culture, and watching The Insider, and too often it seeps into his Soxuality.

It seems kosher for any writer to allude to cultural milestones like The Wizard of Oz, Gone With The Wind and John Wayne, but Roeper casually (and sometimes cryptically) drops references to movies like Dodgeball and Deuce Bigelow Male Gigolo, and he actually mentions Kevin Federline twice in this book.

Occasionally his pop culture references sublimely capture a moment in White Sox history (“Dick Allen was Fonzie before anyone had heard of Fonzie”), but more often they read as annoying, bordering on blasphemous (“Veeck— more of a maverick than Shrek”).

Here’s a sampling of some of Roeper’s Us Weekly-type references: “Those last games against the Twins? I figured they’d be about as meaningful as a third date with Wilmer Valderrama.” “Marte threw a 58-footer that would have been too low for Verne Troyer in a crouch.” “No hitters — they’re extremely rare, like quality Paul Walker movies.” (For those of you who don’t, or want to pretend you don’t, watch Entertainment Tonight, Valderrama was on actor on That 70s Show who dated a lot of starlets, Verne Troyer is the dwarf who played “Mini-Me” in the Austin Powers films, and I have no idea who Paul Walker is.) [Ed. note: Paul Walker starred in the first two The Fast and the Furious films. They were on cable, and I was bored.—SR]
The problem with these E! Network moments is that they don’t really jibe with the Old Style-swilling South Side Irish Sox fan aesthetic. Though, like all Sox fans this season, I’m certainly aware that references to a Sun Times columnists’ manliness can lead to mandatory sensitivity training, I have to say there’s something kind of prissy about these passages. I can’t quite close the gap between teenage Roeper sneaking gallon jugs of hooch into a rowdy Comiskey Park with a dude who compares a playoff race to an American Idol audition, including imaginary quotes from Simon, Paula and Randy.

But ultimately it’s Roeper’s southside roots and not his Tinseltown traipsings that ground this book. As he describes being on the field during the World Series pre-game (since there are few celebrity Sox fans he was the best the network could come up with) he isn’t arrogantly displaying a sense of entitlement. He’s relating the boyish wonder, and sense of disbelief he had while experiencing these unbelievable circumstances. He’s giving his fellow Sox fans a feeling of what it was like, because he knows we all deserved to be down there.

But on that point I have no envy of Roeper. V.I.P. treatment is nice, I’m sure, but I wouldn’t trade my World Series experience way up in section 548 for all the Bud in Wrigley.